The exploration of the solar system over the last decades has broadened our knowledge and understanding of the universe and our place in it. Great scientific and technological achievements have been made, allowing us to study faraway places in the solar system. The world’s space agencies are now facing a new era of continuing space exploration in the 21st century, expanding permanent human presence beyond low Earth orbit for the first time. To pursue this goal, the development of advanced technologies is more urgent than ever before.

The German Aerospace Center (DLR) is developing a new, holistic optical navigation system for all stages of an approach and landing procedure within the ATON project (Autonomous Terrain based Optical Navigation). The central feature of this new navigation system is its landmark-based navigation. Commonly, craters are used as landmarks, as they exhibit very characteristic shapes and they are stable over the long term with respect to shape, structure and positioning. However, the flawless perception of these surface features by computers is a non-trivial task.

A new edge-free, scale-, pose- and illumination-invariant crater detection algorithm is developed for ATON, which will do away with the limitations of current algorithms. To promote further development, the possibility of generating realistic surface images of celestial bodies with a significant number of craters and with well-known local illumination conditions is essential, as well as a technique for estimating the local illumination direction on these images. To date, no software exists to generate artificial renderings of realistically illuminated planetary surfaces while determining the local solar illumination direction.

Having said this, the objective of this thesis is the development of a surface illumination simulation software for solid planetary surfaces with a significant number of craters, whereas all work has been done in the context of the Moon. The thesis work has led to the development of the Moon Surface Illumination Simulation Framework (MSISF), which is the first software known to produce realistic renderings of the entire Moon’s surface from virtually every viewpoint, while simultaneously generating machine-readable information regarding the exactly known parameters for the environmental conditions, such as the local solar illumination angle for every pixel of a rendering showing a point on the Moon’s surface.

To produce its renderings, the MSISF maintains a global digital elevation model (DEM) of the Moon, using the latest data sets from the ongoing NASA Lunar Reconnaissance Orbiter (LRO) mission. The MSISF has also demonstrated its ability to not only produce single renderings, but also whole series of renderings corresponding to a virtual flight trajectory or landing on the Moon. This thesis shows how these renderings will be produced and how they will be suitable for the development and testing of new optical navigation algorithms. The MSISF can also be modified for the rendering of other celestial bodies.

With the MSISF, a basis has been established for the further development of the new DLR crater detection algorithm as well as for the illuminance flow estimation on pictures of solid planetary surfaces.

Background Information:
The movie consists out of 501 single renderings in intervals of approx. 14 minutes, generated with my simulation software ("Moon Surface Illumination Simulation Framework", MSISF) and composed as a video sequence.

The MSISF maintains a database of so-called "surface patterns". Those surface patterns are slices of the Moon's surface, which have been preprocessed as 3D meshes (spatial points connected as triangles). Those patterns are currently available with spatial resolutions of 4, 16 and 64 pixels per degree (longitude/latitude), which refers to approximately 7.581, 1.895 and 0.474 km per pixel at the equator, respectively. The topography data is based on the Lunar Orbiter Laser Altimeter (LOLA) instrument data sets of the ongoing NASA Lunar Reconnaissance Orbiter (LRO) mission. Simply put, the MSISF selects the needed surface patterns accordingly to the visible surface for each picture, does the necessary (astro-)dynamical calculations (i.e. for the Sun, Moon and spacecraft positions), initiates the rendering of the scene and does some postprocessing with the final rendering. The rendering itself is done by POV-Ray, which is integrated in the MSISF.

Some words on the complexity:
All calculations and renderings are done on a single standard machine in 25 hours. The MSISF pattern repository is 125 GiB large, consisting of 265 million vertices for the highest resolution of 64 pixels per degree. Notwithstanding that resolutions till 1024 pixels per degree (corresponds to 29.6 m/pixel) are currently available from NASA LRO LOLA, 64 pixels per degree is pretty much the limit for computability on standard personal computers (my system configuration: Intel Core2 Quad Q6600 4x 2.4 GHz, 16 GB G.Skill RAM DDR2-800). 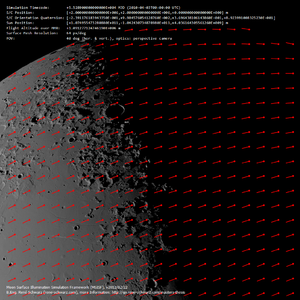 Visualization of the local solar illumination angle on an example rendering of the newly developed software. 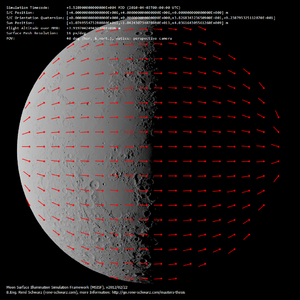 Visualization of the local solar illumination angle on an example rendering of the newly developed software at a high flight altitude.